The interconnectivity between systems and machines has advanced more and more in the various sectors of the industry. You, who are reading this article now, must have witnessed or even applied some solutions to improve data collection and integration between your company`s systems.

Sometimes, the simple implementation of new routines is enough to make different processes talk. However, most control and data acquisition equipment in operation in the industry do not have the technology necessary to perform these tasks. Created to meet the demands of Industry 4.0, the Nexto Xpress compact PLCs solution features advanced communication capabilities to connect different machines and processes to the IoT universe.

Developed by Altus` R&D team, the solution supports a wide variety of communication protocols, allowing it to interact with different types of devices in the industry. Among these protocols, three of them stand out for their capability to dialogue with multiple IoT equipment and systems: OPC UA, MQTT and CANOpen.

See how these protocols differ and why they are widely used in applications for data collection and process integration in the Industry 4.0 environment.

Created in 2008 through an initiative involving different companies in the technological segment, including Microsoft, it was created to ensure the interconnection of smart devices on the factory floor, improving the flow of information exchange and increasing the responsiveness of scenario analysis.

As its name says, OPC UA is an open communication platform (Open Platform Communications), which makes it run under any operating system and on any hardware platform, such as PC, cloud servers and PLC. The protocol is compatible with firewalls and provides a set of controls, such as session encryption, authentication, user control, among others. The standard also has a multi-layered architecture with a structure prepared to incorporate future technological innovations.

In an industrial context, the protocol can be used to make the connection between the PLC and the SCADA supervisory, providing the necessary information to base the decision making of the plant operators and receiving the adjustment instructions for the field devices.

Developed by IBM in the late 1990s based on TCP/IP, MQTT (Message Queue Telemetry Transport), as its name suggests, is a messaging protocol with support for asynchronous communication between the parties, which means, it decouples the sender and the recipient of the message in both space and time. The protocol has a broker-based structure (intermediary), which allows an MQTT client to subscribe and publish on topics, while those topics are managed by the broker and passed on to clients. For example, when a customer publishes a message on a given topic, the broker forwards these messages to all customers subscribed to it.

Unlike other HTTP-based protocols, which exposes important problems of speed, reliability and performance in IoT environments, MQTT is highly reliable and operates with great ease, making it one of the most used standards for communication with the cloud and web applications.

Created in 1994 by a group of companies, CANOpen is one of the most complete and diversified industrial networks on the market today. As it operates on a multi-master communication standard, the network performs in markets with high requirements for data complexity and security. This multi-master model also speeds up communication between application devices and simplifies the work of the network.

Standing as a low-cost international protocol, present in several market equipment, CANOpen can be used to communicate between Xpress and most smart field devices, such as frequency inverters, magnetic sensors, positioners, motors, among others. In this way, the PLC can receive instructions from the supervision system via the OPC UA protocol and transmit them to field equipment through CANOpen.

Get to know some of the functionalities for CAN interface in Nexto Xpress PLCs. 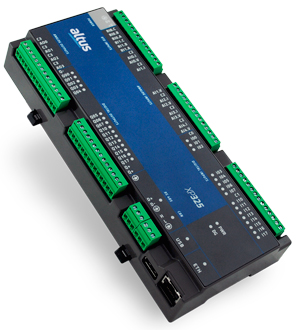 The first line of programmable controllers from Altus ready to meet the demands of Industry 4.0, the Nexto Xpress solution offers four model options that differ in number of I/O points and features: XP300, XP315, XP325 and XP340. All of them feature 16 digital inputs, 16 digital transistor outputs, one Ethernet port, RS-485 serial and another one with CAN. Moreover, the XP315 model features 2 analog RTD inputs of two and three wires and 5 analog inputs for voltage and current. The XP325 model has all these features plus 4 analog outputs, the same features as the XP340 model, which also has WebServer support.

Just as the other members of Nexto family, the Xpress PLCs also use the CODESYS technological platform with configuration via MasterTool IEC XE, FREE programming software with scalability for large and micro projects.

Check out more details about the products of Nexto Xpress solution.

Industrial Ethernet, as its name implies, is a standard based on Ethernet technology and used to connect intelligent systems and devices in the industry...

The importance of redundancy in industrial automation systems

For critical applications with a 24/7 workload and operating a very high loss, a failure that entails plant shutdown can result in a loss to the busines...

Understand what Industrial Instrumentation is and what it is for

Maintaining adequate control over a company`s processes is a fundamental factor not only for field operators, but also for the whole corporation. For th...

What is a datalogger and why should you use it in your application?

Technology has been increasingly transforming industry habits, especially with regard to the production sector. The competitiveness of organizations is ...